The very first Nordic Collaboration User Group (NCUG) meeting took place in Stockholm on June 11th and 12th and it was a rousing success. And ISBG is no more.

Now that IBM has sold the entire collaboration portfolio to HCL, we could no longer call ourselves IBM Collaboration User Group (ISBG in Norwegian). And since we now have set ourselves the goal of becoming a user group for the entire Nordic region, it was time for a new name, a new strategy and a new logo.

This was announced by our leader, Hogne, during his opening presentation (yup, that’s his awesome new Converse shoe at the top of the article). And considering we had people from Sweden, Norway, Denmark and Finland in the room, we had a great start! Next year we want to have people from Iceland, Ferry Islands and Aaland as well. And we want to have board members or helpers from all of these countries as well.

We have some quirks to fix, like the new domain name for this blog, translating all pages and menus into English and some legal issues when it comes to changing the name and letting in members from all over the Nordic countries. But everything will be fixed, no worries!

As for the conference itself, the feedback was great. Both the agenda, location, food and Tuesday dinner with Go-Kart or Bowling and Shuffleboard were very well received. A lot of messages with words of encouragement and thanks have been pouring in for the past week. But it’s we who should be thanking everyone who turned up or supported us in any way!

We will be sharing all the presentations on this page as they come in. But here is a summary of some of the most important stuff:

The headman himself, Richard Jefts, Vice President and General Manager of HCL’s Collaborative Workflow Platform business told us what he could about HCL’s plans for the future of our beloved products. Highlights:

Uffe Sørensen then took the podium and talked about Notes and Domino V11. There was not much news that we haven’t heard, but for those not in the know, here are some highlights:

When it comes to the last point, we found out that the only Nordic language will be Swedish. Read all about it here and give your vote to fix this!

The rest of the days were filled with various customers, IBM partners, IBM Champions and  people from other user groups and a whole bunch of people sharing their knowledge and expertise. You can download the presentations here, and that folder will be updated as the presentations are coming in. Follow us on Twitter and Facebook to receive notifications about when we update with more presentations.

Some highlights from the sessions:

There were also other sessions, but since we had split sessions I couldn’t attend them. Please check out the slides as they come in.

On Tuesday night we met up for Go Kart or bowling and shuffleboard at O’Learys in Kista Galleria. I’m telling you, there are some seriously dangerous…err… I mean excellent drivers among these geeks! We had great fun. After this, we had dinner, which I think most people liked.

All the speakers were given Raspberry PI’s, which we were told were the coolest speaker gifts ever! We also gave out prizes for the fastest drivers in the Go Kart  competition, to three randomly picked attendees and for the people who had registered before April 1st. We also threw out a lot of Domino cups which IBM wanted to get rid of.

During the breaks and lunch people connected, made deals, exchanged contact information and generally  got to know each other. Among the great feedback was that people felt they had talked to more people at this conference than at conferences with hundreds or thousands of people.

Thank you to all the speakers. To the master of ceremonies, Tony Holder, HCL for their support and help, IBM for all the support, promotion and help, the speakers for giving their time and knowledge and to everyone who attended. Here we all are, aren’t we beautiful?

So, spread the word, bring your colleagues and please join us next year in Copenhagen! It will be awesome!

Check out our photo album from the event, to either relive the memories, or see what you missed (click on the photo to open the album in a new window): 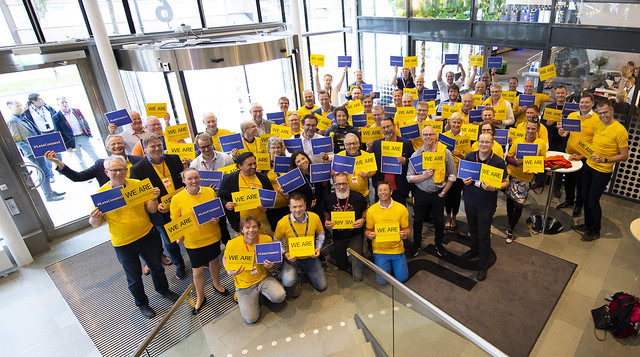 4 thoughts on “ISBG is Now NCUG – A Report From Stockholm”